[pullquote style=”right” quote=”dark”] As a Master Wood Carver, I’ve hand-carved many pieces for luxury homes around the world[/pullquote] 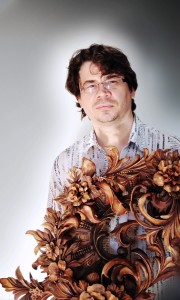 [/custom_frame_left][dropcap]D[/dropcap]oing what he loves the most, Alexander carves from early morning to late in the evening. But things were not always this easy for the award-winning wood carver.
[custom_frame_right shadow=”on”] 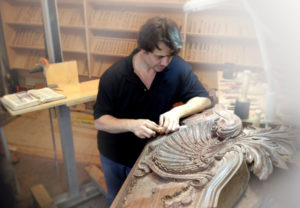 [/custom_frame_right]Born in the Soviet Union in the small town of Dimitrovgrad, Ulyanovsk Region in 1973, Alexander opened his eyes in a family with an inherent love for the arts. His great grandfather, an expert at Custom Wood Carving had his own furniture business. Alexander received his initial education in Ornamental Wood Carving from his grandfather when he was 6 years old. By this time, the family had been relocated to the town of Dimitrovgrad in Russia.
When Alexander was 16, he managed to impress Vladimir Tokarev, a professional carver famous for his skills with creating Hand Carved Furniture and other wooden goods. Vladimir took the teenager under his apprenticeship, teaching him the techniques that would help the kid create unique, award-winning Custom Wood Carving masterpieces.

Life seemed to be heading in the right direction for Alexander when he suffered the biggest setback of his life. He was arrested by the Soviet Government, and sent to prison for his adherence to Faith and refusal to enter the Red Army.

He was released from prison at the age of 21. By that time, Alexander had already started a successful architectural and ornamental wood carving business from prison.
In 1996, Alexander, his wife Nadia, and their 10-month old son Mark immigrated as a political refugee to the USA. The rest, as they say, is history.
Now Alexander lives in South Florida, is still married, and has three children – Mark, Jessica, and Alexis. His love for wood carving has only increased with time, and he still carves every day.

[dropcap]A[/dropcap]lexander has been known to carve  non-stop!
He doesn’t care what time or what day it is when he is in the zone, and like every true visionary, he embraces his art in every single one of its forms. He works with a number of styles including sculpture, high relief, low relief, architectural and ornamental modes. In fact, give him a piece of wood, and he can do anything with it… absolutely anything!

[pullquote style=”left” quote=”dark”]In fact, give him a piece of wood, and he can do anything with it… absolutely anything![/pullquote]Alexander’s intricate wall decorations and wood ornaments are good enough to grace royal palaces. He is also often hired to create intricate classical interior spaces using his trademark hand carved furniture and rococo carvings.
[custom_frame_right shadow=”on”]

[/custom_frame_right] As he creates his masterpieces, Alexander only uses hand tools to carve them out and complete them. No rotary powered tools are ever used in his work. He also does not sand his work as he is of the opinion that tool marks give a unique personality to each of his pieces, ensuring the owners that what they have is distinctively their own and that no two pieces of his will ever be alike. “It is the same as brush marks on canvas in fine art,” he says.

A lot of Alexander’s inspiration comes from Grinling Gibbons, the glorious 16th century wood carver who had the uncanny ability to make wood look like real life objects. Alexander is often approached by his clients to create works of art with that unique Grinling Gibbons look that brings objects to life.
In fact, his technique is quite similar to the modus operandi employed by carvers centuries ago. Alexander makes use of an interesting undercutting technique that may seem extreme to some but it brings out shadows like nothing else. These shadows, according to the artist, are the most important thing in a carving design. As he creates his piece of art, his mind is always looking for ways to create an interesting play of light and shadow, no matter how intricate the object.
And that is how he creates wood carving masterpieces with exquisite details. His work is prized and appreciated the world over because it usually takes ages to create such lifelike effects.
He has been in the United States for more than 2 decades now. And over this time, Alexander Grabovetskiy has earned the standing for being one of the most quality-oriented Master Wood Carvers in the world.

[/custom_frame_left] [pullquote style=”right” quote=”dark”]Alexander Grabovetskiy has earned the standing for being one of the most quality-oriented Master Wood Carvers in the world.[/pullquote]Alexander Grabovetskiy created an ornamental wood carving, simply titled ‘The Wall Decoration’. The masterpiece won him the title of International Woodcarver of the Year, awarded by Wood Worker’s Institute.
His other notable works include beautiful architectural wood carvings depicting animals and other natural phenomenon in all their glory.